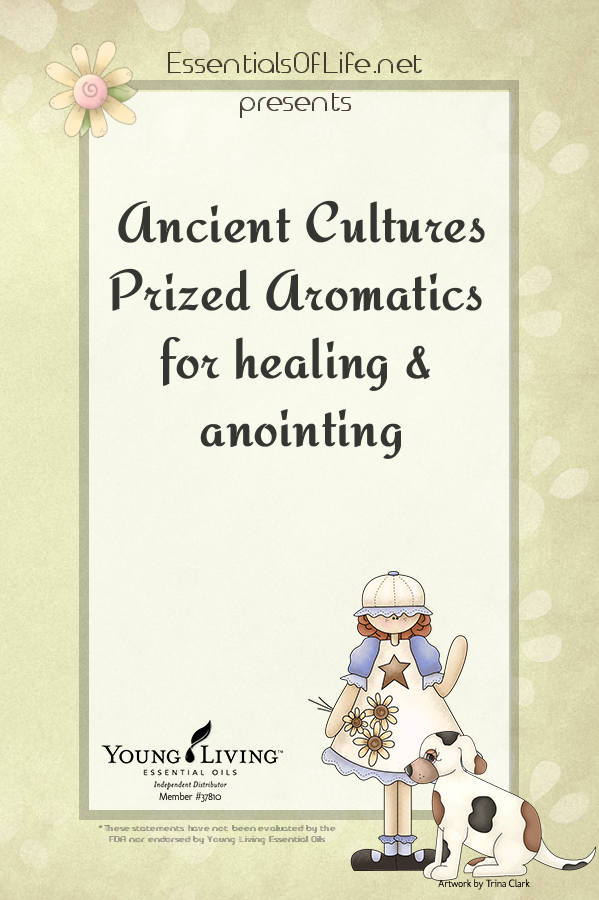 In the beginning, God placed Adam and Even in the Garden of Eden to dwell. It appears that He desired them to live in close association with nature – enjoying the pleasant, rejuvenating fragrances of the surrounding plants.

Not only were the Levites of the Old Testament the spiritual leaders, but the purification of the people was in their jurisdiction. Anointing was done by the Levites and they were the apothecaries with the responsibility of preparing the various oils and incenses.

The holy incense used in the temple on a daily basis was another God-given recipe. It contained stacte (another word for myrrh), onycha, galbanum, and frankincense. Frankincense was also added to burnt offerings. The burning of the resins released the aroma into the air in much the same way as we use diffusers today. Some of the therapeutic value is lost in the heat, but the smoke is still highly effective.

Essential oils were not used solely by the Jews. Ancient healers of cultures throughout the world believed these natural aromas to be spiritually, emotionally, mentally, physically and even socially healing.

On top of that, aromatics were some of the most prized treasures of the ancient world, being traded for gold, silver – or even slaves! When King Tutankhamen's tomb was opened in 1922, some 50 alabaster jars designed to hold 350 liters of oil were discovered. While tomb robbers had stolen nearly all of the precious oils, some of the jars still contained remains of their original contents. The large cache of plundered oil jars documents how valuable fragrant oils were in this ancient civilization.

Alchemists labeled aromatic plant oils as “essential” because they believed that the fragrances reflected the plant's true inner nature. Throughout history, these oils have been used for healing, and are still key elements of many of the world's non-Western healing traditions.

Translations of ancient Egyptian hieroglyphics and Chinese manuscripts describe how priests and physicians used essential oils thousands of years before the time of Christ. In fact, in 1817 the 870-foot-long Ebers Papyrus was discovered. Dating back to 1500 B.C., it was called a medicinal scroll. It mentioned over 800 herbal prescriptions and remedies.

This, along with additional research, indicates that the Egyptians were first to discover the therapeutic potential of essential oils. Other scrolls indicate that the Egyptians had a high success rate in treating as many as 81 different diseases. It has been reported that the precious oils of frankincense, myrrh, galbanum, rosemary, hyssop, cassia, cinnamon, and spikenard were used extensively for anointing and healing the sick. Myrrh was used for embalming because of its effectiveness in preventing bacterial growth.

The Egyptians also created fragrances for personal use, as well as for ritualistic and ceremonial use in temples and pyramids.

Purity of fragrance was of the utmost importance as the goal was divinity. High priests used fragrances to open their subconscious mind and increase their ability to communicate with the spirit world. They believed that bathing, anointing, and using fragrances would emulate and lead to holiness. In death, people must smell of this holiness to be acceptable to the gods, and therefore the sacred oils that corresponded to each organ would be used on the body even after death.

In Greece and Rome

The ancient wisdom of the Egyptians receded due to history, politics and religion. After Alexander the Great conquered Egypt, the victors wanted all essential oil formulas – especially aphrodisiacs and those that gave power over others. Because the Greeks had no spirituality goal, the priests gave incomplete formulas with missing ingredients.

Indian sages believed fragrances affected man's consciousness, and encouraged rituals of worship that incorporated flowers. To this day, flowers are an integral part of daily worship and activity throughout India. Everywhere you travel, you can see people making flower garlands used daily to adorn households, fields, temple shrines… even entire villages! The garlands are blessed at the temple and then given back to the worshiper who wears it throughout the day. It is believed that the constant exposure to these highly evolved fragrances refines and elevates consciousness.